A very quick background on a pair of tweets, uploading an answer I wrote over DMs 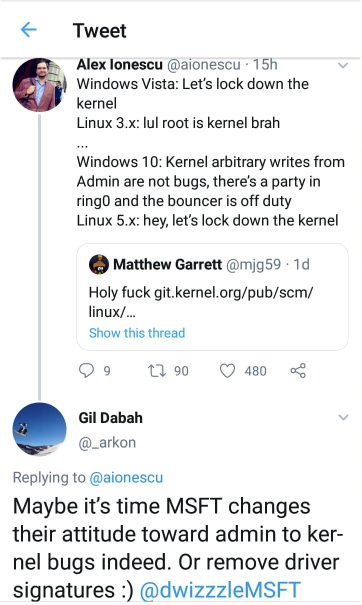 A quick background on what the heck Alex is talking about

Vista introduced a new concept to Windows. That users should not constantly be running with full privileges. Most famously, using UAC.

This was part of a thesis that the administrator was not to be trusted. Why? The administrator could be compromised using any of numerous security issues existing in the OS and that we need an additional gate between admin and total system compromise.

Obviously, this thesis is problematic, as there are a many ways an administrator can take over a system regardless of how much the kernel prevents it. But it’s part of the thesis behind Secure Boot, secure kernel, etc. etc.

Linux didn’t really go for this.

But as part of the whole “Linux is getting serious about security” over the last few years, there’s been a patchset called lockdown. Whose idea is identical. Let’s prevent root (UID 0) from changing basic configurations like boot parameters.

You can read more about this in the following LWN articles

The thesis behind driver signatures is that running in kernel mode is effectively full control and we want to limit that.

In Win 64bit, starting from Vista, MS required all drivers be signed. Initially, just a code signing cert, then later, only Microsoft signed drivers. So, for example, a security companies driver needs to be signed by Microsoft so it can run on non-developer systems.

This approach naturally removes the ability to just download and execute drivers “from the internet”. The thesis was that attackers cannot easily get drivers signed and so users will be safer.

I think this thesis is attacked three times as security theater.